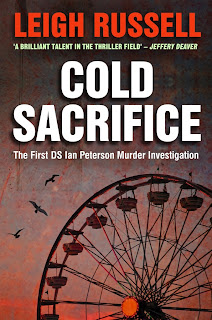 A woman is found stabbed to death on the park and she carries no identification. A mugging? Or is it so simple? When is finally identified her husband, Henry, becomes the prime suspect - although he is the only suspect. Then a prostitute - his alibi - is found strangled and so it seems there is only one link between the victims. Then another body is found. Can they link it back to Henry and wrap them all up as one murderer?

In Russell's previous books DS Ian Peterson worked with Geraldine Steel but she has now taken up a posting in London and he is finding his feet working with new people but also waiting for promotion to DI in this the first 'spin off' story.

Once again Russell tells us a story which, unlike some, has very few suspects and we know, as a reader, that the person in the frame is not the murderer but the chase is not about a 'whodunnit?' but a 'how will they catch the right person?'. And once again the author has intertwined the off duty life with the investigation in an extremely frustrating way. Frustrating? Yes, if you've ever had to balance work and home life the way Peterson does then you will truly 'feel' the atmosphere she creates and balances. It's for this reason that I would say that MY preference is for Geraldine Steel but... The next DI Peterson could easily change all that - read the book to find out why.

Another great investigation that carries Russell's hallmark of trying to remain closer to real life than fiction. If you like crime novels and you haven't tried  Leigh Russell's books yet then give them a go - you just might become addicted.