The Dead Ground by Claire McGowan 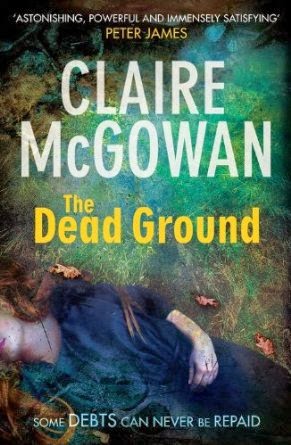 "A stolen baby. A murdered woman. A decades-old atrocity. Something connects them all..."

When a new born baby goes missing from Ballyterrin hospital, everyone at first assumes that it's just a one-off incident. Then a pro-abortion campaigner goes missing and is found dead - gruesomely.  She had plenty of people who objected to what she was doing, had even received death threats, but would anyone have actually carried through on them? Could there somehow be a link between the events? With no good leads to follow the police are still stumbling in the dark when another baby is taken...and a pregnant woman goes missing. There must be a link somewhere, but where..
All these baby-related cases are a bit close to home for forensic psychologist Paula Maguire whose personal life is in turmoil with an unexpected pregnancy- and no clear cut answer to the inevitable question Who's the father?

The Dead Ground is the second of Claire McGowan's "Paula Maguire" thrillers - set in the Northern Irish border town of Ballyterrin where Paula grew up and to which, after years in London, she's now returned as a forensic psychologist working with a special 'missing persons' unit of the local police. I really enjoyed the first of the series The Lost with a strong female lead, and police and personal plot lines that complemented each other. Happily The Dead Ground continues in this way, proving to be another excellent page-turner, even though I guessed the culprit and motive before the police team did - sometimes I wish I could just step into a book and tell the detectives who to question and what to ask!  Paula's personal life and problems again twist round the police investigation - while she tries to come to terms with her unplanned pregnancy everything at work seems centred round babies too!

Events unfold from Paula's point of view as the investigation progresses, so there's none of the 'getting inside the killer's head' which I'm too squeamish for. Don't mistake this for cosy crime though. The story opens with a particularly disturbing scene of IRA retribution but although the violence is at times gruesome it always seems relevant and necessary to the plot - not merely thrown in gratuitously.

In Paula and the police team she works with, McGowan has created some great, realistic characters; people that I feel I'm coming to know, with their good points - and bad. I'm really enjoying this series and looking forward to the next book, to the un-folding of some of the personal plot line and, most importantly, discovering who the father of Paula's baby is!