The Crimson Ribbon by Katherine Clements 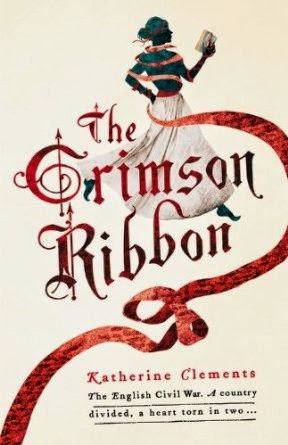 
"Based on the real figure of the fascinating Elizabeth Poole, The Crimson Ribbon is the mesmerising story of two women's obsession, superstition and hope.

May Day 1646. The Civil War is raging and what should be a rare moment of blessing for the town of Ely takes a brutal turn. Ruth Flowers is left with little choice but to flee the household of Oliver Cromwell, the only home she has ever known. On the road to London, Ruth sparks an uneasy alliance with a soldier, the battle-scarred and troubled Joseph. But when she reaches the city, it's in the Poole household that she finds refuge.

Lizzie Poole, beautiful and charismatic, enthrals the vulnerable Ruth, who binds herself inextricably to Lizzie's world. But in these troubled times, Ruth is haunted by fears of her past catching up with her. And as Lizzie's radical ideas escalate, Ruth finds herself carried to the heart of the country's conflict, to the trial of a king."

While the synopsis above (lifted from the publisher's website) says "Based on the real figure of the fascinating Elizabeth Poole" I would suggest that it is very loosely based. Ruth - the pivotal character in the book - is wholly fictional and so her relationship with Cromwell and Poole is clearly fictional too. I sometimes feel that author's notes - which in this case come at the back of the book - should come first to add context but then they often, by necessity, contain spoilers. It's a tough one but knowing that Poole was a real person in history I was left wondering as I read "Is there any real evidence for 'this' or 'that'?".

It's a story of love and friendship and political loyalties at a very turbulent time in English history but in addition to that it highlights the injustice and terror that the witch hunts instilled in society.

There are some books that create tension in the reader and Ruth's fear of the witch hunt created that tension in me at certain times. When describing the lynching of a 'witch' I really felt I would rather not have had as much detail as there was. Also when she met Joseph on the road to London I felt that I knew exactly what was going to happen for the rest of the book and nearly put it down. I'm glad I didn't because I couldn't have been more wrong.

Many of the sex scenes (and there are a few) felt more detailed than they need be for my taste (I am an A1 prude) but the story became extremely turbulent with love and loyalties being stretched to the limit before the final scene which brought the whole thing to a conclusion.

On balance I enjoyed this book but please make sure that you do read the author's notes and make sure you leave them to the end.