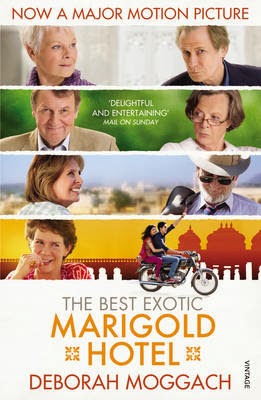 Norman is becoming too much of a problem for retirement homes to cope with. Not because of any health issues, but because of his improper behaviour towards the nursing staff! When ALL the local homes refuse to take him, he's forced to move in with family; his daughter Pauline guiltily feels she should look after him but son-in-law Ravi just wants him out of the house! Along with a cousin from India he comes up with a plan - to open a retirement home in a former hotel in Bangalore; the cost would be lower than in Britain, the weather better and surely Norman's reputation couldn't have reached that far! Filled with enthusiasm they produce brochures and soon elderly British residents are filling the rooms and discovering a new way, and lease, of life.

This is one of a big stack of Deborah Moggach novels I won in a Hay Festival competition last year and the first I've got round to reading as part of my New Year reading plans  It was previously published as These Foolish Things, and re-named as a film tie-in, though I suspect the plot of the film and the book differ.

It's a delightful, wry comedy about a group of 70-somethings, growing old, not quite disgracefully but certainly not in the sedate style their children expect of them. All the 'old folks' are still full of life and not at all ready to be written off just yet! In India they feel like they can shake of their 'oldies' image and just be themselves - maybe a little slower moving around but that gives all the more chance to soak up new experiences. For some there's even the possibility of a new romance ...

While light-hearted, it did make me wonder about the way we think about 'old people', particularly the assumption that having reached a certain age they're too old to care about anything, that sitting in a retirement home, maybe glued to daytime TV, is enough for them - I can't imagine it would be for me!

from Amazon
Posted by maryom at 09:21