In The Blood by Lisa Unger 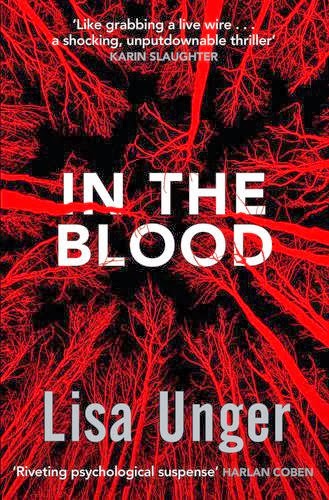 Lana was a child with personality disorders before she was further damaged by witnessing her father burying her mother, rolled in her mother's favourite carpet, in a grave in the woods. He then coaches her to lie to the police to cover-up what's happened. She's been medicated for years now, through special schools and is now a normal functioning part of society. Except for one thing... she lies. Constantly... to hide who she is, who her family are and what she has been through. She is now studying, under the mentorship of Dr Langdon, to help children like herself become normal members of society.

She takes a part time job 'babysitting' Luke who turns out to be a child who has the same issues that she has. Luke decides to play a game of Scavenger Hunt with Lana that starts out weird and turns weirder and more dangerous with each clue. How could Luke, eleven year old genius that he is, put together a hunt that seems to reveal so much about Lana's past, on his own. And now Beck, Lana's only true friend, has gone missing and the police want to question Lana as the only suspect.

Stories that involve characters with mental 'disorders' often leave me uncomfortable and I'm sure I'm not alone in this - and Lana seems a completely 'normal' person now she's medicated but as the story progresses we realise just how fragile she is. And Luke...I as a reader could see far more in the child than Lana could - but then that's what we expect from books... it involves us in them. Despite my discomfort I just had to keep reading and found this to be a book I would recommend to almost any adult - definitely not a bedtime read though or one for the kids.

A book with more twists than a Curly-Wurly, I thoroughly enjoyed this book, despite being totally creeped out by some of the goings on and did I readjust to the revelations at the end? I don't think I have or will.