The Road to Reckoning by Robert Lautner 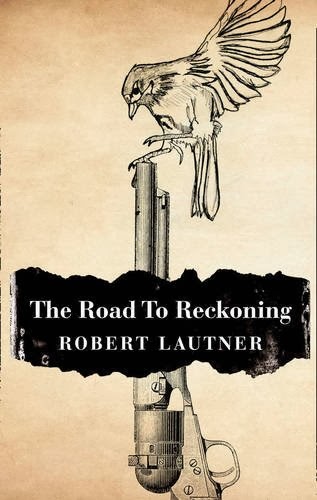 ‘I, to this day, hold to only one truth: if a man chooses to carry a gun he will get shot. My father agreed to carry twelve.’

In April 1837, recently widowed John Walker decides to leave his job selling spectacles door-to-door in New York city and head out West, selling a new type of hand-gun recently invented by Samuel Colt. To his twelve year old son Tom this seems a foolish business venture but an exciting change from dull, confined life with his aunt, and so the two of them head off through New Jersey to the wilds of Pennsylvania. At first things go well and despite Tom's doubts there's enough demand for this new-fangled gun to make a financial success of the trip but they've travelled into a wild, lawless place and things soon go horribly wrong. Tom finds himself stranded in the middle of nowhere with no idea of how to get back to the safety of his New York home - his only hope is Henry Stands, a rough-living ex-ranger, used to living on the road and now travelling back East in the hope of picking up some bounty-hunter work.

The Road To Reckoning is an exciting coming of age story, set in the early 1800s America with a lot of elements of the traditional Western - gunslingers, saloons, lonely two-horse towns in the middle of nowhere - but it isn't set in the distant deserts of Texas, New Mexico or Colorado but among forests of Pennsylvania. Although today it could probably be reached from New York in barely more than a couple of hours, in the 1830s this was frontier-land - an area of scattered settlements among the forests and hills, with no real law enforcement, where, despite the Government's confident words, native Indians still lurk behind the trees to prey on the unwary and where it's every man for himself. Tom and his father, both naive city-dwellers, travelling in a buggy best suited to paved streets, are asking for trouble venturing out into the wilds - it's all far too dangerous for such innocents and calamity of one sort or another seems destined for them.
Told from the perspective of a middle-aged Tom looking back on the adventure of his youth, it allows the reader to see events through both the eyes of a twelve year old and a worldly-wise adult; an adult who is bemoaning the proliferation of guns, when everyone he meets seems to have one to hand - not in the present day, but the 1870s!  The story in itself foreshadows the later 'western' era when Colt's revolver would find frequent use in saloon brawls across the Wild West.

The Road To Reckoning is a tale full of strange adventures and weird, sometimes nightmarish characters. The basic situation, a youngster insisting on tagging along with an older experienced 'character', reminded me very much of True Grit but that didn't detract from my enjoyment. It's one I'd recommend to both adults and a younger readership looking for something a little different - the style in which it's told is a little strange though, capturing the speech patterns of its time, but recognisable to fans of Westerns.