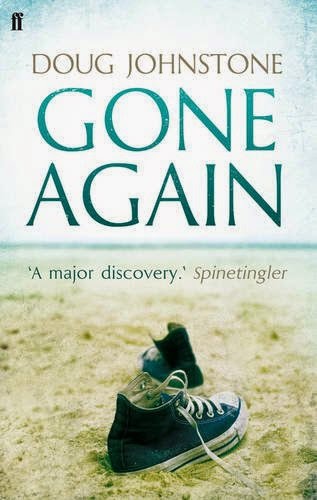 Mark and Lauren have a happy marriage, a 6 year old son, Nathan, and are now expecting another child. When Mark is phoned to pick up his son from school, he just thinks Lauren has forgotten that it's 'her' day for this. But when she doesn't appear by Nathan's bedtime, Mark knows something is definitely wrong. Lauren has done this before, just after Nathan was born, and Mark fears that her pregnancy may have sparked a similar reaction. Then, in the first of several well-timed reveals, the reader discovers that Mark has a history of violence ...and we begin to wonder what exactly happened and can we believe what Mark says....

Gone Again is another great read from Doug Johnstone - a story about a perfectly normal family that get dragged into something sinister and find life spiralling out of control. In a way, it's a book of two halves, certainly of two moods. Things start a little slowly, exploring Mark's relationships with his wife, his son and his mother-in-law, and I wondered if this was going to be a different style novel to Doug Johnstone's usual fare; more of a psychological thriller with less action. But, as the reveals keep coming and Mark takes matters in hand in a d-i-y vigilante way, things really kick off. Many of us would just leave things in the hands of the police - not want to take on the world single-handedly as Mark does -  and this is where the slow build-up pays off. It seems logical with the earlier insights into Mark's character, and his grudging admittance to his violent streak, that this is how he would react.

It's a book that I raced through, each twist and turn making me want to read faster to reach the all-revealing conclusion.

Like Hit And Run it's set in Edinburgh but in a different part of the city - the beach area of Portobello with its views out over the Firth of Forth.

from Amazon
Posted by maryom at 10:02