As part of the blog tour ahead of next week's UKYA Extravaganza to be held at Waterstones Nottingham, we bring you a profile of one of the authors appearing there - David Massey.

David Massey's varied career has taken him from teaching and music journalism to presenting, producing and writing for radio.

As the Romanian revolution was ending, David led a team taking supplies to Bucharest and Timisoara. On the way home he stopped near Checkpoint Charlie to help chip holes in the Berlin Wall. Rather fittingly, David and his wife Debi now run Globehuggers Emergency Supplies - a business specializing in bespoke grab bags and emergency equipment. 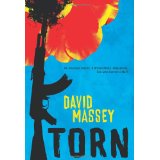 beauty of the country, and the fear, camaraderie and bravery of the soldiers. It went on to win the Lancashire Awards Book of the year 2013 and has been nominated in the UK for several other awards including the prestigious Brandford Boase, Leeds Award, and the Coventry Inspiration Award. 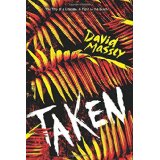 His second novel TAKEN was released in the UK in March 2014 and has been nominated for the Carnegie Medal. The story follows the teenage crew of a round-the-world yacht, but a dream-come-true adventure turns into a nightmare when the ship is boarded by pirates and the crew are held hostage. Both stories share common themes -  dangerous, life-threatening situations, comradeship and a strong female lead character.

David is the Patron Of Reading for The Wordsley School near his home town of Stourbridge, and has just completed his latest novel - THE BONE SURFERS
Posted by maryom at 09:04