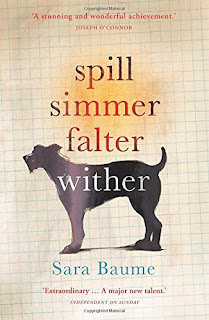 When loner Ray finds One-Eye at the dog pound it's like the meeting of two lost souls. Both are misfits, viewed with suspicion by neighbours or dog-wardens, carrying with them an aura of 'otherness', and the potential for violence or danger. At first glance you'd trust neither of them.
Raised in virtual isolation by a grief-stricken father, Ray's life has been warped from the beginning; he never mixed with children his own age, never had mates to hang out with or a girlfriend, never even had a job. His neighbours see him as a bit weird, and keep their distance. Now, he's 57, and following the death of his father is living alone for the first time - and just doesn't know how to carry on.
For his part, One-Eye isn't the sort of dog you'd pick for a family pet. Looking at the world lop-sidedly from his remaining eye, he has the battered beaten-up appearance of a fighter - but while his wild, ferocious traits have been encouraged and developed by his previous owner, he's also been on the receiving end of violence from both men and animals. Full of fear, it takes time for him to come to trust his new owner.
Gradually a bond forms between these two, but that streak of violence still lurks beneath the surface and events cause the pair to go on the run.

To get this clear from the start, this isn't a sweetly charming tale, not some sentimental mix of Marley and Me and The Shawshank Redemption, where man meets dog, they bond, and live happily ever after; both are too scarred by life for that. It is though a tale of both man and dog trying to recover from deep hurts, striving to put their pasts behind them and start again.
One-Eye had my sympathy from the start. His fear of people spoke of an abused past, and I believe vicious dogs aren't born, but trained to be that way by man, and are then victimised when that 'training' emerges at an inappropriate time and place. Ray starts out as just a little odd; tolerated in the village where he grew up, eyed with suspicion but basically harmless; it was only as his secrets were revealed that I began to wonder if this view wasn't quite true.

From the moment Ray takes One-Eye home, he starts to talk to him; as One-Eye is introduced to the house where Ray has lived all his life, as they walk round the village or along the seafront, play football on a deserted beach, and as they drive away from the seaside through Ireland's countryside, Ray keeps up a rambling monologue, ostensibly aimed at One-Eye, describing all he sees, capturing the sights and sounds along the way, sharing secrets and gradually revealing the dark secret he hides. I started to feel that this was more about a dog giving a man a chance at redemption, than the other, more obvious, way round.

For a debut novel, I think this is just amazing.  Baume's writing enlisted my empathy for both of these outsiders, and had me hoping against hope that Ray and One-Eye would in some way be saved.

Originally published in Eire by Tramp Press, this book came to my attention over summer via Irish book bloggers* singing its praises, and catching Sara Baume at Edinburgh Book Festival, hearing her read from it and speak about it, convinced me it was something I would love, so I'm delighted to see it now published in the UK by Windmill Books.