Anything That Isn't This by Chris Priestley 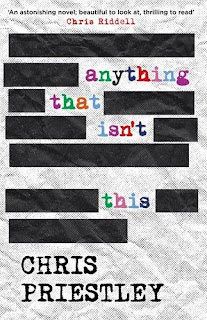 Frank Palp has sat the last of his exams, is about to leave school and enter the world of 'work'. It should be a time of opening horizons and fresh opportunities, but that's not how Frank sees it. To him it's possibly the least appealing prospect in the world - not that he liked school, but with every passing year life looks more depressing. In the city where he lives, nearly everyone is employed by the Ministry in one capacity or another. Their lives seem dull and joy-less, their days spent at boring, meaningless jobs, their evenings passed in front of mind-numbing TV programmes, all of course approved by the Ministry. Surely there has to be something better than this? Once, Frank had had plans, dreams of being a writer, a hope of avoiding the tedium he sees in his parents' lives ..... but now he's beginning to realise there's no escape. He heads to the graveyard and talks things over with his (deceased) grandfather, but the enigmatic tales the dead have to tell don't seem to help much. Frank still, though, believes in chance; finding a message in a bottle convinces him that he's found his soul-mate, and an accidental meeting with mysterious man-from-the-Ministry Mr Vertex leads to a quick advancement in Frank's career. Both have to be good things, don't they?

You've possibly heard of Chris Priestley as the author of horror stories aimed at a youngish audience (though his The Dead of Winter is one of my favourite ghostly reads regardless) but this is a departure - a dystopian love story, with a bit of thriller in there too, for older teens.

It's set in a fictional, vaguely east European country, where after a war and revolution the king remains as a popular figurehead but everything is run by the Ministry - the so-called 'civil servants' are actually police, 'students' are spies, and the old castle towers over the city spreading gloom. But Frank's feelings are universal; he's full of teenage angst about his current situation and his future. His dreams of being a writer aren't likely to be fulfilled, he has no real direction in life, and is being pushed into a job that isn't of his choosing but is what others expect of him. The only light in his life is his love for Olivia - and again he's a typical teen; obsessive, slightly stalkerish and cringingly realistic. What he would hope for is summed up by the wish he finds in a bottle "Anything that isn't this".

The style, the setting and atmosphere and above all the young couple striving to find something worthwhile in a dull grey world reminded me of Ursula le Guin's Orsinian Tales. I've been reading a digital copy for review, so couldn't fully appreciate the illustrations (also by the author) that echo the sinister mood of the story, but they can be found on the author's facebookpage


A little bit dystopian, a little bit love story, Anything That Isn't This captures the confusion of teenage feelings the world over, is about challenging the norm and searching for hope in a dull grey world.