A Spool of Blue Thread by Anne Tyler 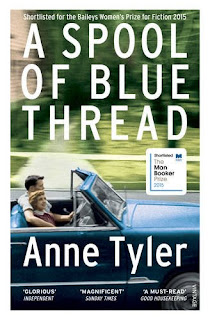 The story of the Whitshank family is inseparable from the story of their house. Built for a client by the curiously named family patriarch Junior in the 1930s, it was for him, an ideal house, one he yearned to own and at last, with a little manoeuvring, his wish came true. On his death, his only son Red moved in with his wife Abby and young family, and filled the house again with noise and bustle, but now those children have grown, married, left home and have children of their own.

It's a quiet book - the story really of a fairly average family, to whom nothing extreme happens, either good or bad, they just jog along as most of us do. Their comings and goings are probably of little interest to anyone outside the family, but within the family they're built up to great dramas. They have their secrets of course, and it turns out that the 'accepted' version of family history might not be quite true,


It's a rather simplistic thing to say but if you love Anne Tyler's books, you'll love it, if you find them a bit lacking in 'grit' then like me you'll be left wanting. I've read other books by Anne Tyler and found them pleasant enough but not, for me, anything special. Somehow, being short-listed for both the Bailey's Women's Fiction Prize and the Man Booker Prize, I'd expected a little more in some way from this; sadly it didn't live up to my hopes.

This is one of this year's Bailey's Prize shortlist which I'm working my way through rather slowly. Other reviews below
A God In Every Stone - Kamila Shamsie