These Seven edited by Ross Bradshaw 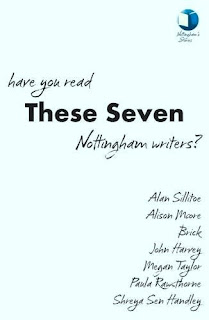 A couple of weeks ago, I went along to Nottingham Waterstones for the launch of These Seven, a collection of short stories commissioned by Nottingham City of Literature featuring authors with a connection to the city and part of its bid for UNESCO City of Literature status. Having heard the authors reading from their work I wanted to read more.....

The collection opens with a story from John Harvey, a crime author best known for his Charlie Resnick series set in Nottingham. Ask Me Now although featuring DS Tom Whitemore of the Public protection team, isn't so much a crime story as one dealing with domestic problems - but problems that could easily slip into abuse.

In Megan Taylor's Here We Are Again, two old friends are meeting up after several years apart. It's told in the first person and captures that expectant but nervous feeling of waiting for someone, when you hope they'll turn up but are afraid that they won't.

Brick's Simone the Stylite is a short graphic novel - Simone has always been a self-reliant person, with no need for masses of friends, but now maybe she's taken things to extremes by taking up residence in the tall Aspire sculpture at Nottingham university. From her vantage point, she sends out notes, little words of wisdom that inspire people. The university though seems quick to institutionalise her and even cash in on their famous hermit!

A Foreign Land by YA author Paula Rawsthorne looks at the plight of failed asylum seekers from the point of view of a young boy. Jay is ten and, with his mum, dad and young sister, has lived in Nottingham for six years. He can't remember his 'homeland' of Darfur but from what he hears it doesn't like the sort of place he'd like to visit. Then his family lose their appeal, and have to return to Sudan.....everything will be ok, won't it? things can't really be as bad as the News claims? Told from Jay's point of view, this is a timely reminder of the terrors that make people flee their own country in a desperate bid to find safety.

Alison Moore will be known to many as author of the Booker-listed The Lighthouse, but her short story is in a very different vein. In Hardanger, a dysfunctional family go away to Norway on a short break ....but there the story changes from one of personal relationships to something rather more in the ghostly or horror style.  The ending left a decidedly uneasy creepy feel behind it.

Shreya Sen Handley's Nimmi's Wall followed on this vaguely supernatural theme. A young Indian woman, recently moved to Nottingham, investigates the strange mist-shrouded wall at the bottom of her garden...and encounters some very strange people there.

The collection rounds off with A Time to Keep a story by, possibly Nottingham's most famous writer, the late Alan Sillitoe, about a teenager, Martin,who nurses a passion for books. In them he finds a world more appealing than his everyday one, but his cousin Raymond has decided its time to introduce him to the grown-up world of 'work'......

Although differing greatly in tone I loved each one, and I'm now intending to seek out more work by these authors.