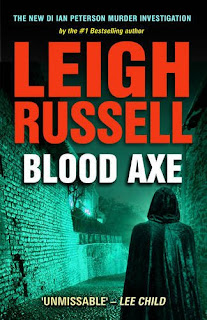 When a 16 year old girl  is found brutally murdered and robbed, killed by a single blow from an axe, the hunt is on for the killer. DI Peterson looks at the only two suspects that are obvious but the question lingers - Who carries an axe unless it's with the intent to murder?

A few days later a jewellery store is robbed and the manager murdered even more brutally and there are only two things that the crimes have in common - stolen jewellery and the use of an axe as the weapon.

With the media making a meal of these killings the police need to get these crimes solved before the murderer can strike again and it becomes a hunt for a serial killer.

Russell, for me, has hardly put a foot wrong in any of her writing although there was a change in style between the early Geraldine Steel's and the later. In the first, the reader knew the identity and was following Geraldine's detection methods and thinking and in the later they became more "whodunnits". In Blood Axe she has combined those techniques extremely well and we spend time "in the head" of the killer (not a pleasant place at all!!) while not knowing their identity - in fact the surprise of their identity is greater than I expected.

DI Peterson is also becoming a more complete character and where I have always felt Geraldine was my favourite - not any more.

We all have moments when we are reading when we want to understand why the detectives don't broaden their search wider or do this or that but I found this to be Russell's best book yet (and there have been a lot of good ones).

If you can stand the tension of being in the head of the killer - whose reasoning is not as balanced as your own, you will love this book - I did.

Publisher - No Exit Press
Genre - Adult Crime Thriller
Posted by The Mole at 10:12