The Betrothed Sister by Carol McGrath 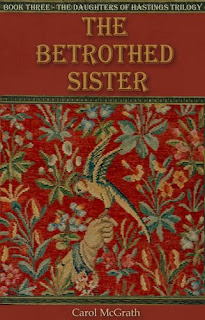 After the death of her father, King Harold, at the battle of Senlac (Hastings), Thea's family has been split up - her mother has retired out of the world's eye to a convent, her sister Gunnhild is wasting her life away in another; of Thea's brothers, the youngest, Ulf, is being held hostage in Normandy, Magnus has died in an attempt to win back their lands, while the others, with their grandmother and Thea herself, have fled overseas vowing revenge on William the Bastard. In exile at the court of Danish king, Sweyn, Thea and her grandmother work towards finding her a 'match' worthy of her royal blood. When an offer is made on behalf of Prince Vladimir of Kiev, it seems like Thea's dreams are about to come true - but her troubles aren't over yet ....there are many obstacles in her way, years of waiting, first in Denmark, then in Novgorod, while she's 'trained' to become a suitable wife for a Russian prince, and while the power-struggles in Russia are resolved for its a country almost as divided by war-fare as her English home.


This last book in Carol Mcgrath's Daughters of Hastings series tells the story of Thea, daughter of Harold Godwinson and his 'handfasted' wife Elditha. Thea has appeared as a minor character in the previous books but now her story is fully explored. I found this a fascinating read in several ways - Thea's personal story as a homeless wanderer, still cherishing both hopes for happiness and a family, and a grievance against England's Norman conquerors, plays out against the backdrop of Danish and Russian history of the early eleventh century, of which I knew nothing.
It's fiction, of course, so maybe not absolutely 'true' in all ways, but the characters are brought to life as real, breathing people rather than names from a history book (I particularly liked the plain bitchiness of the Danish princesses, even though they made life difficult for Thea), it gives a flavour of the period in general, and the customs of Denmark and Russia at that time - both of which are strange to Thea; she's used to a lot more freedom than the courts of these countries allow women - and doesn't find sitting quietly sewing very suitable to her temperament! Even so, she does come across as more content to wait and let things happen to her, than either her mother (in The Handfasted Wife) or her sister Gunnhild (in The Swan Daughter) but as an outsider,living on the good-will of others, Thea's actions are fa more restricted.
The series as a whole has left me thinking about the lives of these princesses - of how they were caught up in events beyond their control, separated from family, and their lives planned out for them by others. I wonder if any of them found true happiness at all/