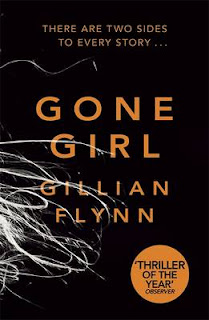 On her 5th wedding anniversary, Amy Elliott Dunne goes missing. Her husband Nick returns home to find the front door wide open, the iron left on, the kettle boiling dry and the living room in disarray - and no sign of his wife. From the police point of view, the husband is always the prime suspect and Nick with his stoical attitude and happy smiley face seems less concerned than he might be. Whichever way the police turn, more evidence seems to pile up against Nick despite his protestations of innocence.

The story is told from two angles - Nick's starting on the day of Amy's disappearance - and Amy's in the form of a diary dating back several years. Not surprisingly the two accounts paint very different views of their marriage and the events leading up to Amy's disappearance. About half way through though comes a twist - which I can't really go into for fear of spoilers - but it casts a new light on everything read so far. All this twisting and turning of the plot, building up the reader's distrust of what anyone says, exploring the relationship between Amy and Nick - all of it is brilliant but... something somewhere didn't totally grab me. I think it could all have been said and done in less words. Sometimes there was just too much 'everyday' detail stopping the story from progressing. But most importantly, I couldn't find any sympathy for either Nick or Amy - which I think is necessary to really feel engaged with a story.

from Amazon
Posted by maryom at 09:00