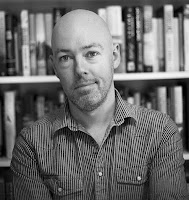 Yesterday (8th May 2013) saw John Boyne talking about his latest book, This House is Haunted, at a Waterstones event in Nottingham.

John is most widely known for his book The Boy in The Striped Pyjamas which was made into a film in 2008 and both film and book have received a great deal of acclaim. The Boy in the Striped Pyjamas is one of the three books he has written for children and This House is Haunted is his eighth adult book.

John started with a reading from the early part of his latest book in which he sets the tone of the story. As a ghost story this is, once again, a genre shift for him as well as the first time he has written a book from the perspective of a woman. The reading certainly captured the imagination of the audience! You can check out the synopsis here on the Waterstones' website.

This was followed by a question and answer session which brought questions as diverse as his writings. A couple of questions really caught my attention. When asked which was his favourite of his own books I think people expected The Boy... but were surprised when he said The Absolutist. A later question about any books he had had rejected revealed that some books had proved more popular than he expected while other had not caught the public's imagination where he had expected them to - I suppose this happens with most authors. The other question that made me smile was when asked what he would have done if his second book hadn't been published (he had abandoned the first book as a learning exercise and it sits in a drawer today) he looked surprised at the question, genuinely, and replied that he would have written another because that's all there is for him to do. Many more questions were asked by the enthusiastic audience and he explained that the idea for The Boy in the Striped Pyjamas came to him and he just sat and wrote and wrote and wrote, stopping only for short breaks and had the first draft completed in two and a half days!

The event wrapped up with the traditional author signing which also gives the ability for short 'one on one's that mean people don't have a roomful of people to feel embarrassed in front of.

Once again an excellent event organised by the Nottingham branch of Waterstones and our thanks go to them and to John Boyne for an excellent evening's entertainment. Remember to watch out for author events in your area and meet your favourite authors.
Posted by maryom at 09:00