The Wilful Eye (Tales from the Tower Vol 1) 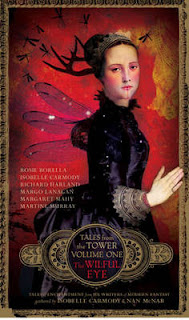 Edited by Isobelle Carmody and Nan McNab The Wilful Eye is the first of two volumes of re-told fairy tales from Allen and Unwin.
This collection takes six stories familiar to most of us -  The Tinderbox, Rumplestiltskin, the Snow Queen, Beauty and the Beast, Babes in the Wood and the Steadfast Tin Soldier - and  lets six authors  - Margo Lanagan, Isobelle Carmody, Rosie Borella, Richard Harland, Margaret Mahy and Martine Murray - loose on them to reinterpret as they feel fit.
Margo Lanagan is the only one with which I'm familiar, through her novel The Tender Morsels which re-works the story of Snow White and Rose Red in a sometimes rather disturbing and distressing manner. While not quite as dark in tone, this collection is NOT for younger readers. The stories have been taken away from the cosy nursery setting and back to their darker folk tale roots via sex, drugs and violence.
Some are set in the traditional 'once upon a time' vague past, others in the more-or-less present. I liked most those, such as Wolf Night by Margaret Mahy, that took the basic tale and removed it to a modern setting, emphasizing the timeless quality at the heart of these tales.
There's an introduction by Isobelle Carmody about the inspiration behind the whole collection and notes from the authors explaining what influenced their choice of tale and what shaped their reinterpretation.

Recommended by the publisher as a 'young adult' read, suitable from ages 16 to 18 but I think many older adults (if that's the correct term) will love it too; I certainly did.

Buy The Wilful Eye (Tales from the Tower)

from Amazon
Posted by maryom at 09:25