The Hope Factory by Lavanya Sankaran 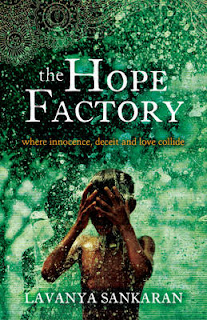 The Hope Factory is the story of two people from different ends of the social spectrum who share a common goal - to improve their life.
Anand is the owner of a factory which makes car body parts. He's affluent, lives in a spacious modern house with his wife and two children, thinks of himself as a 'modern' Indian, not held back by superstitions or out of date ideas about caste. He's hoping to clinch an important deal with a Japanese firm but expansion of his factory is vital to this and to buy the necessary land he comes up against the culture of bribery and back-handers that he refuses to be part of.
Kamala on the other hand works in Anand's house as a cleaner. She's a widow with a teenage son to support. They live in one small room and share their water supply and bathroom facilities with other lodgers. Her finances are stretched in all directions. She'd like her bright clever son to go to a better school which would open up wider opportunities for him - but such a thing requires money and meanwhile the demand for building land is pushing up her rent. All Kamala's hopes rest on the whim of her employer and his wife.

The Hope Factory is vivid portrayal of life in today's India, highlighting the inequalities of life there while showing the underlying similarities - a sort of modern, literary, Indian 'Upstairs, Downstairs'. It's set in Bangalore, a vibrant, noisy city, bursting at the seams, ever growing and expanding, often at the expense of its inhabitants. The plot concentrates on the lives of  business-man Anand and his maid, Kamala and their parallel attempts to better their lives. The obstacles they face are different but come down in the end to the need to have money before you can make more.
There are many themes explored throughout the novel - the clash between old and new methods, Eastern and Western ways; the enormous gap between poor and wealthy - but it is above all a very readable, enjoyable story. The characters are well drawn, believable individuals - the sort you feel you could transport out of the novel to elsewhere and know how they'd behave and react. Both Anand and Kamala gained my sympathies for their persistence, particularly Kamala whose life has been harsh almost beyond belief.

Although the author has published short stories before, The Hope Factory is her debut novel - and another amazing book from Tinder Press.

from Amazon
Posted by maryom at 10:44