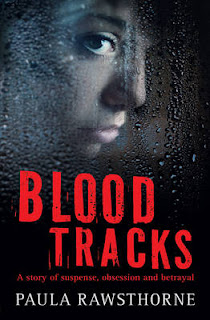 It's not often that we can get to book launches  - too many are held in far off London - so we were very excited to be invited along to the party celebrating the publication of Paula Rawsthorne's second  teen thriller Blood Tracks at Waterstones in Nottingham.

The event was pretty well packed with all sorts of people who we presumed were extended family, but when Paula took the podium she went through a long list of people who had assisted in the research or writing of the book. There were family members who had given her a bed so she could get away from the daily routine to concentrate on writing. There was a gentleman who gave advice on how a body can be dumped at sea. The local coroner was thanked for advice on inquest procedure. There were supporters of her first book "The Truth About Celia Frost", local librarians, a gentleman from "Left Lion" (a Nottingham arts magazine). The list was a long one and many were among the throng gathered to support the launch of her latest book.

We were given an introduction to Paula's editor from Usborne, the publishers, as well as her new agent - her old one having received a lucrative offer to move away from agency work and into publishing. 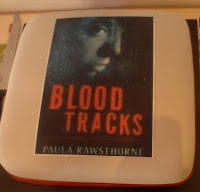 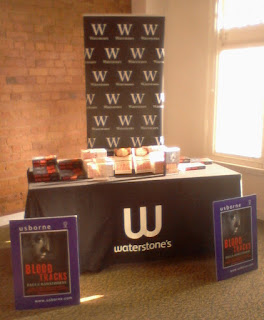 This photo was taken of the signing desk long before the signing but the books were already well depleted with people all over clutching them in anticipation of getting them signed.