The State We're In by Adele Parks 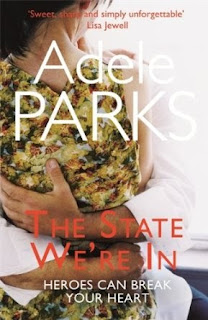 Jo and Dean meet on plane from London to Chicago. Could it be love at first sight? Well, it certainly doesn't appear that way. Dean is tired and depressed, returning home after visiting his estranged father who is dying in a London hospital. Jo has decided that at 35, after one too many mornings of waking up with yet another unsuitable man, that her only chance of happiness is to fly to Chicago and break up a wedding and steal her ex-fiancé back! Neither seem in the right place to be starting a new relationship yet by the time they reach Chicago everything has changed....
Meanwhile, back in London, things are also changing. Dean's father starts to face the idea that maybe life wasn't just about him and having fun, and Jo's mother decides enough is enough and, after nearly 40 years of seemingly blissful marriage, it's time to leave her husband.

The State We're In is a wonderful engrossing read - the sort that I can completely lose myself in. I wanted to know the answer to so many questions that I could barely put it down and quite rattled my way through.
How to describe it without giving away too much is a bit of a challenge though; it's a family drama played out over two generations; it's about falling in love, living a lie, the meaning of family and the sacrifices a woman might make for the sake of her children.
It's the kind of book that too often attracts the 'women's fiction' tag, but it's a perceptive insight into family life, both idyllic and dreadful, and the individuals that are part of it. The characters are all people that you can believe in whether it's the ever optimistic Jo with her long line of one night stands - each one a potential prince to rescue her from spinsterhood but each turning into a frog come the cold light of morning - or Dean's irresponsible dad, only ever concerned with his own pleasure and happiness, and totally disregarding the needs of others.

...and the ending? It's an absolute stunner!


Buy The State We're In

from Amazon
Posted by maryom at 11:09