The Unquiet Grave by Steven Dunne 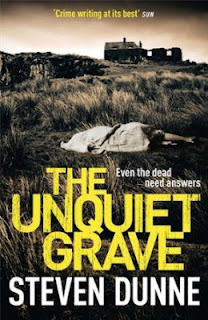 DI Damen Brook is back from suspension - but relegated to the Cold Case Unit. In his dismal basement office he reluctantly starts to look into a series of seemingly unrelated murders dating back to the 1960s.  A previous investigation attempted to link these cases but merely led to the ridicule of the detective concerned - could he have been right all along? His new boss Copeland has a personal interest in Brook's investigations - his teenage sister was murdered when he was a child and the solving of her murder has been the driving force behind his life and career. He hopes Brook with a fresh vision can shed light on a case that he's spent so many years working on. Brook soon finds himself drawn into the riddles posed by these events of so long ago and as he unravels the threads, uncovers a web of deceit involving witnesses, suspects and police.
His old DS, John Noble, is working on a current case involving the disappearance of another youngster - and Brook begins to wonder if this too is related.

The Unquiet Grave is amazingly complex and very, very clever. I think this may be one of the cleverest, perhaps THE cleverest, whodunnits that I've read. It's the sort of book with so many storylines up in the air and twisting round each other, that I wonder how the writer keeps track of them all.
It's one of those detective novels where the reader is privy to information unknown to the detective on the case, so I could see pieces of the jigsaw starting to fall into place before Brooks did - not all of them though and there were enough twists and turns and un-tied off ends to keep me reading to the end.

There are more insights into Brook's troubled past - as I only 'met' him in Dunne's last novel Deity I don't know the full ins and outs of his connection with the serial killer known as the Reaper so this gave some tantalising glimpses without, I hope, giving too much away. I think it's getting time that I read the earlier novels, though.