Finches of Mars by Brian Aldiss 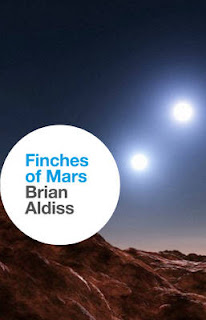 As wars break out on Earth and become ever more petty, a group of universities put together the finances to send a colony to Mars on the strict contractual obligation that there is no return to Earth. When they get there they find that while women can conceive, all the babies are born dead or die very shortly after birth. Then the wars on earth interfere with the supplies and finances for the Mars colony and it looks like they are on totally on their own.

Heralded as the last Science Fiction novel that Brian Aldiss will write, it brings an era to a close. After 56 years of writing Sci-Fi he will write no more. But let's not forget that he has not only written Sci-fi.

Sci-fi seems to follow two distinct types: there is the hero out to save the earth and there is the kind that attempts to reflect on man's cultural and political evolution. In this story there is no hero. There are, amusingly, several characters that want and try to be a hero - at least in the eyes of the other characters - but none actually make it. The story reflects on where mankind seems to be headed today and while what Aldiss has to say is a little depressing, by watching the news it becomes difficult to argue against it. But the end... - of which I will say nothing - has a degree of poetry to it that while some purists will say "no way" others (like me) will say "YES, way". And I saw a little Jasper FForde in the ending. You will need to read both to understand.

When it comes to reading then sci-fi was my first love and this brought back so many memories of how sci-fi could be. Do I have to say that I really enjoyed this book? Well I really did.

An excellent novel that will be loved by Brian Aldiss fans and all sci-fi readers alike. It's published on 6th June 2013 so is available for pre-order now.

But that isn't all from Mr Aldiss on our blog this week because we also have a Q&A as well as an EXCLUSIVE (ours alone - no-one else's - all ours) short story from Mr Aldiss, SO WATCH THIS BLOG!