The Silent Wife by A.S.A Harrison 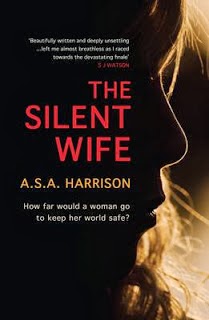 Jodi and Todd have lived together for over 20 years. They may not have the legal paperwork but are effectively a happily married couple. They have everything they could want - a fabulous apartment with stunning lake views, Todd's built-from-nothing construction business, Jodi's psychotherapy practice, and a dog to replace the children they never had. And if Todd 'wanders' once in a while? Well, this is something Jodi's learned to ignore and live with so long as he always comes home to her.  But Todd's latest affair is turning serious and he's under increasing pressure to leave Jodi. Will she find herself left high and dry? How far will Jodi go to get him back... or get even?

The Silent Wife is an intimate look at the workings of a long term relationship - and its break down. Told from the alternating points of view of Jodi and Todd, the story follows their thoughts and reasoning as they struggle to come to terms with their changed circumstances. Harrison cleverly balances both points of view so that although the reader may veer towards Jodi's standpoint, Todd's version of events is presented with the same level of sympathy. Both of them, though, come over as people more driven by the pressure of outside forces than their own desires. Jodi rather drifts along in her ivory tower not wanting to really involve herself with everyday nitty-gritty. This way she finds it possible to turn a blind eye to her financial position and Todd's affairs; even the drastic action she ultimately decides to take is suggested and carried out by someone else. While, for a man who's built up his own business, Todd seems extraordinarily weak-willed when it comes to personal matters; pushed one way by his girlfriend, pulled the other by his old comfortable life.
It was less of a thriller than I'd expected but none the worse for it.

I don't like to compare book A to book B but the similarities between this and Gone Girl by Gillian Flynn are too hard to ignore. The Silent Wife has better characterisation and a believable plot line firmly rooted in reality; Gone Girl is more of a thriller but with over-the-top extremes of emotions and actions. I definitely preferred The Silent Wife.

from Amazon
Posted by maryom at 13:36