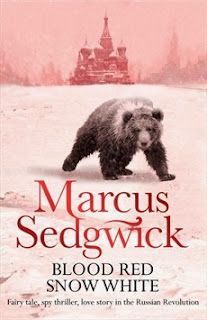 This is the first of my Christmas present books - the fictionalised story of Arthur Ransome, who as a young man went to Russia at the time of the Revolution, leaving his wife and small daughter behind in England, and fell in love with Russia in general and one Russian woman in particular, Evgenia. It moves from fairy tale to spy thriller and back to fairy tale, a format that feels as if it reflects Ransome's relationship with Russia; his first impressions being of a vast country locked in the 'once upon a time' of princes and palaces, woodcutters and bears, but one that's about to be dragged into the 20th century with city streets filled with people demanding change, backed by guns and tanks. After these turbulent years, the fairy tale returns with a dangerous journey through snow-covered countryside and opposing battle lines.

I was in the middle of another book at Christmas, but I opened this, just intending to skim a few pages and get a feel for it - and just got pulled in to it. Marcus Sedgwick is best known for his Gothic fantasy horror stories for children and teens but here he turns his hand to the real-life adventure of another children's writer, Arthur Ransome. Going to Russia before World War 1, Ransome fell in love with the country, collecting folk tales which he published as Old Peter's Russian Tales. Later, when, revolution broke out, being 'on the spot' and friendly with the Communists now in power, he was asked to pass information about them back to Britain; some government officials were not so certain about which side Ransome's loyalties lay, suspecting him of passing information back to the Russians as well. His movement between the two countries became restricted; a heart-breaking situation for him as his beloved daughter Tabitha was in one, and Evgenia, the Russian women he doesn't want to lose, in the other. The story doesn't really give a definitive answer to this but I suspect that the only people who ever really knew the whole truth were Ransome and Evgenia.

Although ostensibly a teens' book, I think like many of Sedgwick's stories there's no real upper age limit to its appeal.

First published in 2007, this might not be easily available but is on Kindle Blood Red, Snow White