The Dead Lake by Hamid Ismailov 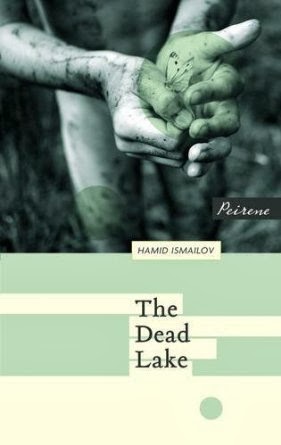 Some time ago, the narrator was travelling by rail across the vast expanses of the Kazakhstan steppes. His journey had already taken four days and there seemed to be no end in sight. At every stop, people got on selling food, drink or locally-produced goods, and among them at one station, was a young boy of maybe 10 or 12, who played the violin like a virtuoso. When the traveller heard him speak, he realised this wasn't a young boy but a grown man trapped in a child-sized body. Gradually he teased the man's story out of him - growing up in a remote area of Kazakhstan, his love for the beautiful girl next door, and the fateful trip to the Dead Lake which put his life on hold.

Peirene are kicking off their 2014 Coming of Age: Towards Identity series with another stunner - though oddly, one about a boy who, Peter Pan-like, doesn't grow up.
Peirene have become a publisher that I trust to provide thought-provoking but very readable novellas, but when I saw "His work is still banned in Uzbekistan today" in the author's biography I half expected a worthy but dull, over-politicised book. I needn't have worried, this is far from that; it's the very human story of one boy caught, both literally and figuratively, in the fall out from Russia's desire to pass the US in the arms race. In the intro, publisher Meike Ziervogel likens The Dead Lake to one of Grimm's Fairy tales, transforming 'an innermost fear into an outward reality', and when you start to look there are lots of fairy-tale elements to be found - lovers bound together in childhood that nothing can separate, the beautiful and oh-so-appealing but prohibited lake and the boy who risks the witch's curse. On the other hand, it's a story about the horrors of atomic testing, of a government that risks people's lives in the race for nuclear armament.
Told in sparse, straight-forward prose The Dead Lake will make your heart ache for Yerzhan and all his family, still so resilient despite everything.