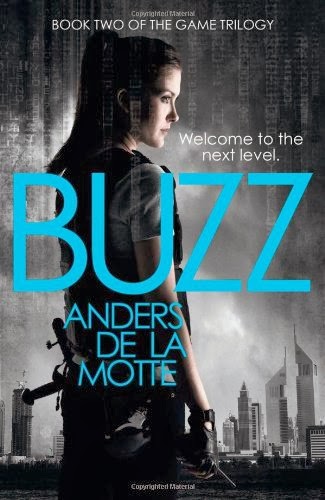 Welcome to the next level

Having managed to get out of The Game alive, HP has spent 14 months hiding out in exotic places as far from his Swedish home as he can get. Even there though he's constantly reminded of the Game and its dangers - the distinctive mobile phones used by players seem to be everywhere. When a casual (sexual) acquaintance dies suddenly, HP is sure that the Game Master is somehow behind it, and decides to do a little investigating....
Meanwhile his sister Rebecca has problems of her own. Suspended from police duties after a botched up security operation, she seems to have become the target of a malicious internet forum. The gossip and rumours about her are all posted anonymously, so how can she fight back?

There's a change of pace in this, book two of the Game Trilogy. Previously, HP was out on the street, one of the 'ants' scurrying around at the Game Master's bidding; there was a lot of action and violence. Now using his brains and the power of words, he's trying to move up a level in the organisation of The Game by infiltrating behind the scenes in what appears to be a 'normal' company. Its 'business' though is to shape public opinion via internet sites using multiple identities to blog and comment here, there and everywhere. Being paid to spend all day chatting in online chat-rooms, posting on forums and commenting on blogs sounds like HP's ideal job and there are times when he almost forgets his real motive. Fortunately, there's always a nagging voice asking Who's behind it all? What do they gain? Is there a link to The Game?
Rebecca's story winds in and around HP's with disastrous results for him when the two collide. While most of the tension is of the 'will he be found out?' kind, poor HP does end up on the receiving end of some menacing violence.
Buzz is just as compelling as Game but in a very different way. Whereas bk 1 was fun and exciting, I couldn't imagine it really happening; this time I can. Everyone's heard of the companies that pay to have good reviews written about them, and of people who go round anonymously rubbishing their opponents, so why not take things a little further and shape opinions on politics or world events? Again, it's a brilliant story for the conspiracy-theorists, tapping right into the things they fear most.

from Amazon
Posted by maryom at 10:20