The Thing About December by Donal Ryan 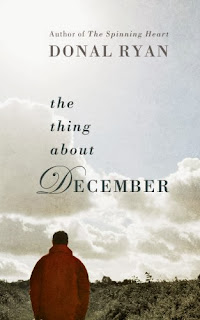 Johnsey Cunliffe has always been a bit 'slow', never as sharp-witted as the other boys and seen by all as the village idiot; gentle soul who wouldn't harm anything, incapable of fighting back, so an easy target for being mocked and bullied. His parents have always protected and sheltered him but now he's on his own and the world is a more confusing place than he'd ever imagined possible, and the mockery and taunting has turned to violence.
Since Johnsey's father's death, the family farm has been let out to a neighbouring farmer and the sheds and yards stand empty of livestock, but its value is on the increase. It lies in the centre of a potential money-making land-deal with the whole village hoping to benefit from developing it for housing and industry, but Johnsey doesn't want to give up his heritage, the only thing he has to link him to the stronger, cleverer Cunliffe men before him.
Sorry, but this isn't the most cheerful, upbeat novel to start the year with - in fact, it's the opposite; an absolute heart-breaker of a read. Johnsey's tragedy is played out month by month, a chapter for each, and for each there's a comparison with how things were during his idyllic-seeming childhood, with life revolving around the farm and seasons, and how they are for him now. As Johnsey struggles to cope with being on his own, the reader gets to share his anguish and bewilderment - he knows he isn't as bright and quick as others but doesn't see why people think they can fool him all the time and trample all over his opinions and hopes. At times it's painful to read as the reader is more aware of the mess he's digging himself into than Johnsey is. I hoped against hope that somehow, some-way, everything would work out fine but it would have needed the waving of a magic wand. Even so the end came as a shock.
The Thing About December is a moving and immensely sad read but still compelling and one I think I'll come back to.
It's early days, but I think this will end up on my 2014's Pick of the Year.

Buy The Thing About December

from Amazon
Posted by maryom at 13:29