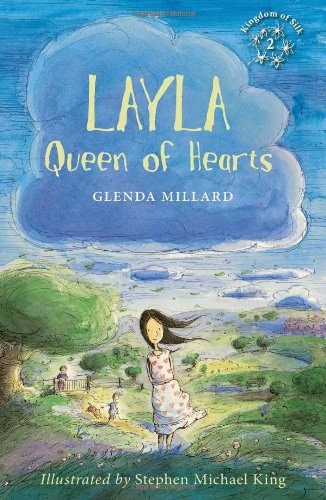 Illustrated by Stephen Michael King
Review by The Mole

When Senior Citizen's Day is announced the children are invited to bring an elderly relative to school. Layla has no one to take and rather than share Griffin's (Layla's best friend) grandma she sets about finding someone to take of her own - and finds Miss Amelie.

Layla is one of those rare children and even rarer adults - she is naive, kind, empathic and strong willed. In fact if the world was peopled by such characters then perhaps we could enjoy world peace. In the meantime though...

As a children's story you expect a happy-ish sort of ending but you don't tend to find what you expect in The Kingdom of Silk. This is the second in the series of books and they take their name from Griffin's family - the Silks. The Silks are an uncommon family and befriend uncommon people.

The book ends on a sad note but none the less a very worthwhile one and anyone reading these books will have cause to stop and reflect on themselves and others around them.

Although the illustrator differs from book 1 in the series, they are similar in nature and once again complement the story adding appeal for the younger reader. Book 3 comes out 1st February 2014.