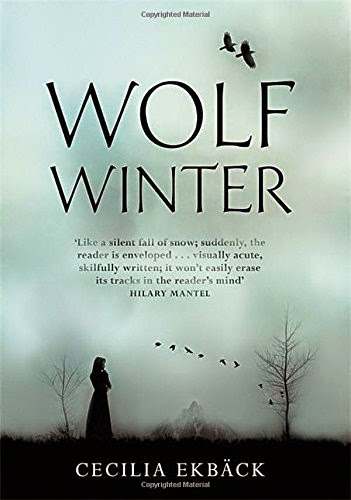 Blackasen Mountain is a remote virtually uninhabited area of Swedish Lapland. Summers are brief and winters harsh. In 1717 a new family of settlers arrive in this inhospitable place; Paavo, who wants to put as much land between him and the sea as possible, his wife Maija and their two daughters, Frederika and Dorotea. Wolves and bears roam the land, and when Frederika discovers the dead body of one of their neighbours, wild animals are easily blamed. Maija isn't convinced though - to her, the slashes on the body look more like the work of a sword or rapier than a clawed foot. Enlisting the help of the priest, another comparative newcomer, Maija refuses to let the matter go ....but in a place where people can go for days without seeing their neighbours secrets are easily hidden and hard to expose.

Wolf Winter takes the whodunnit murder mystery and transports it to a time and place far removed from the modern urban landscape. In the early eighteenth century the far north of Sweden is remote and empty; a place where life itself is a struggle against the vagaries of the weather and the loss of a harvest can mean starvation. In the long, hard, dark winter, wolves howl at the doors, fear and loneliness build and the barriers between 'modern' logical beliefs and old pagan traditions break down. It's an atmosphere in which the supernatural is easy to believe in, and Frederika's visions of wolves are as believable as the real animals.


In the best tradition of murder mysteries, there's an abundance of suspects - despite the unpromising sparsely populated nature of the area. The indigenous nomadic Lapps, whose traditional grazing grounds are now being parcelled out to settlers as farms, are viewed with suspicion by the incomers and are the automatic suspects for anything untoward, but all of the settlers seem to have arrived at Blackasen with secrets or running away from something; from involvement in political or court intrigues to Paavo's fear of the sea or what we would see as post-traumatic shock in men returned from war. Maija's poking about uncovers all manner of things that people would rather have kept hidden!

Add to this the amazing descriptive passages capturing the endless days of Blackasen's brief summer or the incredible fury and power of a raging blizzard and it all makes for a very special book.