The Long Dry by Cynan Jones 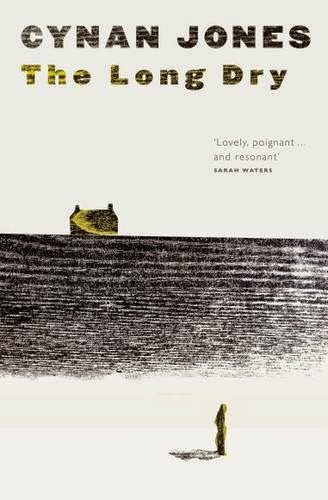 
One hot summer morning, Gareth wakes early and goes to check on his ready-to-calf cows - and discovers one has gone missing over night. Feeling restless, she'll have wandered off, as they do, pushing her way through hedges and  fences, probably heading for the nasty boggy bit of the farm, so before she can come to any harm, Gareth goes in search of her.  As the day gets hotter he tramps up hill and down, over fields lying parched after a long drought, and his thoughts turn on the problems of his relationship with his wife, the happier early years of their marriage and his plans for the future.

If you heard a novel described as "the story of a man looking for a cow", you'd probably not be rushing to read it - but give it a chance, think of Gareth as a rural version of Leopold Bloom, pursuing his odyssey not through Dublin's paved streets but alongside the hedges and fences of a Welsh hill farm. As the day progresses, the reader slips into the thoughts of Gareth, his wife Kate, hiding her secrets back in the farmhouse, teenage son Dylan angry "out of habit" and young daughter Emmy who sees fairies and dead people. This is one of the strengths of Jones' writing - that he can bring to life such a diverse range of feelings and emotions; first I felt Gareth's version of how his marriage is sliding on to the rocks - then saw events from Kate's completely opposite standpoint; when two boys are faced with the dreadful task of killing an injured rabbit, I felt not just there, but part of them, willing them on but appalled at the same time; I even felt I understood the bafflement of a cow just delivered of a still-born calf.
This is Cynan Jones' first novel and is set in the landscape that's become familiar to me through his later work - Everything I Found On The Beach and The Dig. There's the same grit and grimness underlying the beauty of the landscape, the same feeling of inevitable anguish. It's not all doom and gloom - there's light relief from the teenage son, with his delight in driving the transit van, and the mass 'attack' of the ducks on the nearby seaside town - but moments of joy seem short-lived and over-shadowed by sorrow to come.

Originally published by Parthian  The Long Dry has now been re-printed by Granta as part of a matching set of all three of Jones' novels.