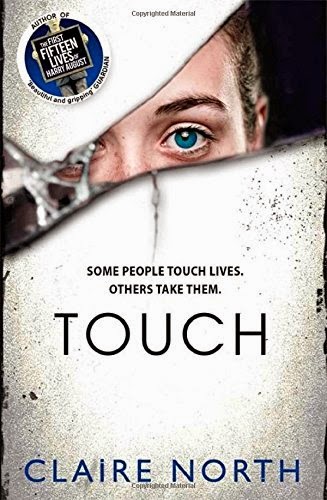 Imagine that by taking hold of someone's hand, you could become them, could jump from body to body as you wished, and stay there for as long as you liked, from seconds to years. This is what 'Kepler' and others like him can do. Now someone has decided that it's time to stop him - but its easier to evade an assassin if you've some idea of who sent them and why. So begins a game of cat and mouse as Kepler tries to track down the person behind it, while trying to avoid those pursuing him.

This latest novel from Claire North is a mind-stretcher in the way that The First Fifteen Lives of Harry August was. The author takes one of those throwaway 'just imagine' or 'what if' scenarios that we all have from time to time and weaves a compelling thriller around it - with Harry August, it was re-living the same life several times; with Touch it's being able to move from body to body.
The thriller aspect is fast-paced, action-packed, full of twists, turns and deviousness. It starts with the 'bang' of a murder and Kepler running for his life, and carries on at this breathless pace; as a game of hunter and hunted it's up there with the best of spy thrillers.
The sci-fi 'just imagine' aspect is well thought through, and gives the reader plenty to think about - the morality of being able to take over another person's body, with or without their consent; the impact such action has on both host and 'guest' - maybe it explains those minutes of forgetfulness that we all experience from time to time, maybe it accounts for long-term memory loss, but for the 'guest' there's the choice of taking over another person's life completely - almost cradle to grave - or of drifting from one host to another, never putting down roots, or having family and long-term friends. It has its advantages though - for a few short minutes, Kepler can be anyone he wants - football player, actress, president....

I loved Harry August but there's something just a bit more satisfying about Touch, making it a 'must read' whether you're a sci-fi lover or not.