A Killing Moon by Steven Dunne 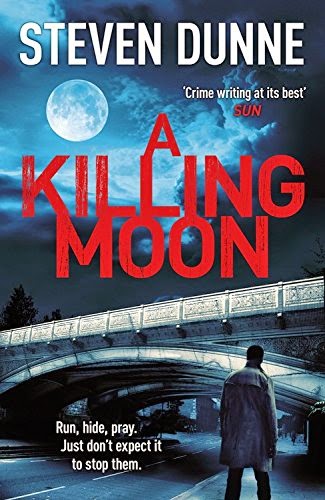 One snowy night Caitlin Kinnear disappears on her way back from the pub to her student digs. At first no one notices - her closest friend, fellow student Laurie, thinks she's gone home to her family in Belfast for the Easter break, her family assume she's still in Derby - so by the time her disappearance is reported to the police the trail has started to go cold. DS John Noble knows he may be clutching at straws but thinks there could be a link to other similar missing persons cases - all young single women from overseas, either studying or holidaying in Derby, with no real connection between them other than the last sighting of them being in the same city. His boss DI Damen Brook isn't impressed with Noble's theory, but faced with an even less palatable job investigating scrap metal theft, decides to prioritise the case.....and soon finds himself with a murder enquiry on his hands.
One of the last people to see Caitlin alive was barman Jake Tanner, but he's got his own problems to worry about. As the sole carer for his younger 'special needs' brother, he finds it difficult to hold on to work and make ends meet. He thinks he's struck lucky with a new Polish themed bar opening in town ...but he could hardly be more wrong!

A Killing Moon is another brilliantly tense thriller from Derby's very own crime writer Steven Dunne. This is the fifth in the DI Brook series and I think I'm getting used to having my home city's streets filled with murderers - at least, fictional ones! Brook seems now to have put his past firmly behind him, to be recovering from the psychological scars of his encounter with The Reaper. His success in clearing up cold cases has got him on the good side of his superior and he seems more relaxed, fitting in better with his colleagues and even starting to be sociable at times (not too often though, that's not his style).

As I've come to expect from Dunne's thrillers, A Killing Moon isn't a simple 'guess the murderer' style crime novel. It's one of those books in which things start out quietly, and seemingly simply, but soon escalate, with extra threads weaving their way in, as Brook and Noble find themselves on the trail of a sinister conspiracy targeting young women away from home. The plot twists in satisfyingly complex ways - and, even though the reader, seeing more than one side to the story, is often a couple of steps ahead of the police enquiry, it isn't possible to foresee how things will end. As with earlier DI Brook stories there's a certain level of moral ambivalence in A Killing Moon - people with good principles end up doing horrific things and sometimes the end might justify the questionable means.