All This Will Be Lost by Brian Payton 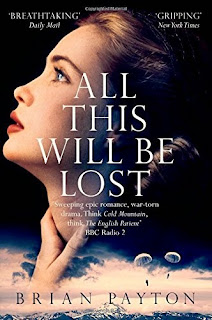 April 1943 - grieving for his brother lost over the English Channel, unable to enlist himself, journalist John Easley takes it upon himself to uncover the true facts about a war taking place much nearer to his own doorstep - the invasion of the Alaskan Aleutian islands by the Japanese, an event which the US military want to keep quiet. To this end, he hitches a lift out on a bombing run to the Japanese occupied island of Attu - When the plane is shot down he and one of the crew of six are the only survivors. They've heard the rumours about how the Japanese treat their prisoners and neither want to surrender to them, but the chances of surviving in the inhospitable landscape are slim, almost to the point of non-existence.

Meanwhile back home in Seattle, his wife Helen begins to worry over John's prolonged absence. While 'regular' forces wives are informed of their husbands' fate, there's no one to send news of a missing unofficial reporter. Desperate for news of him she determines to follow him north, the only way she can - by signing up for a forces entertainment troop. She knows she's unlikely to find John or even anyone who's heard of him but she needs to do something, anything, rather than sit and wait.

All This Will Be Lost is a war story with a difference - set in an almost unheard-of war zone, the remote Aleutian islands, which stretch across the Arctic from Alaska to Russia like stepping stones, it's a grim tale of survival against the odds, of grit and determination, of very personal battles and hoping against all the odds.
John is battling for his very survival - although it's 'spring', the weather only moves between snow and fog, there are neither trees nor bushes for shelter or fuel, and the Japanese are encamped just over the next ridge. The two men end up in a cave, surviving on shellfish and an occasional seabird, raiding the Japanese camp despite the obvious risk but growing bolder as their situation becomes more perilous. As he comes close to starvation, John finds himself making difficult choices about what might be considered 'food', choices the reader may not agree with.
Helen's story is less extreme but her life so far has been cosy and sheltered. Empowered by circumstances, she's forced to step out of her comfort zone, and take on a role for which she feels totally unsuited. I got the impression that even asking questions of strangers was something so completely out of character for her that undertaking this journey required tremendous amounts of courage on her part.

The islands themselves form a third party to this story - windswept and bleak, but with a fragile beauty that is being trampled upon by the opposing armies. Their inhabitants have been forcibly removed, their villages abandoned and make-shift airfields and army bases taken their place. In the way of much fiction, it had me spiralling away and wanting to know more about the background - about this sector of WW2, about the islands themselves and their inhabitants, so summarily evacuated from their homes.

In case this all sounds familiar, this story has previously been published under the title The Wind Is Not  A River.