No Place To Die by Clare Donoghue 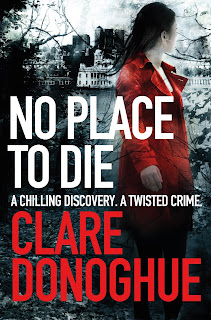 DI Mike Lockyer is struggling to cope after his last case, so his sergeant Jane Bennett finds herself with two disturbing cases on her hands. Friend and retired cop Mark Leech has gone missing, leaving a trail of blood splatters behind him which suggests he hasn't gone willingly, and then a dead body is discovered in a specially constructed underground chamber. It's not, as at first feared, Mark's body but that of missing student, Maggie Hungerford,and her death is stranger and more sinister than anything Jane's previously seen.The tiny space had been equipped with a pipe to allow a certain amount of air in, and a camera so that the killer could presumably watch his victim die. Who could be so twisted to want to kill someone in such a terrifying way?

Jane finds herself under pressure from all sides - at work, with little or no support from her boss, she has no one to share the burden of the investigation; the personal relationship between her and Lockyer has deteriorated; and at home, she has her autistic son to care for and feels torn between wanting to do her job as best she can and spending more time with him.

The second in the Lockyer/Bennett series plays on the terror that most of us would feel if trapped underground - I could only get through some of the scenes by constantly reminding myself that it wasn't at all real! For the most part, the story concentrates on the police investigation and Jane's private life, but occasionally it's interrupted by passages from the victims' point of view, describing the horror of being buried alive, struggling for air with numbness creeping up on them - all very, very scary stuff!

The investigation gets off to a slow start - with plenty of potential suspects, but no one who stands out as the killer - and there's almost a feeling of bewilderment on Jane's part as more victims are found, one dating back several years.
Most crime thrillers have their twists and turns, but this plot is positively convoluted! I think if anyone spots the killer before the last chapter, it's due to a lucky guess rather than super-deduction.
It's a difficult thing to say whether or not I enjoyed this book - I found the 'buried' sections too disturbing to enjoy, and, now knowing the nature of the crime and who was behind it, I wouldn't re-read it; it's a very personal thing though and other, less claustrophobic, readers will have less qualms.