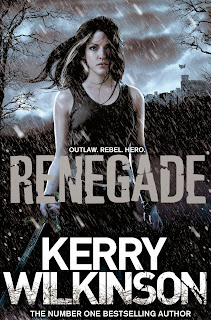 Silver Blackthorn and eleven other Offerings have escaped from Windsor Castle, managing to evade the clutches of King Victor, the Minister Prime and their guards the Kingsmen. But merely escaping isn't enough; getting out was - if not the 'easy' part - the obvious thing to do, beyond that Silver never really had any plans. She can't just go home - even if her family are still there, there'll surely be Kingsmen lying in wait - but what should she do? Everyone seems to have plans for her - to act as figurehead for the various dissident groups, to use her knowledge, or to manipulate her actions to suit their own plans.
With the silver streak in her hair, Silver is never going to be anonymous or able to hide in a crowd. And if the Kingsmen can't catch Silver then retaliation for her actions will be taken on her family....

Renegade is the second book of Kerry Wilkinson's very British dystopian series, the Silver Blackthorn trilogy and, as such, picks up from the point at which Reckoning ended. There's such a lot of world-building and character development in the first book that it's best to start there; Renegade hits the ground running (rather literally as Silver and the other Offerings try to avoid re-capture), expecting the reader to be up to speed with the plot so far.
Having been chosen as one of the Offerings for King Victor and uncovered the abuse at the heart of his government, Silver's first thoughts had been of escape - for her and as many of the other imprisoned teens as possible. Now she's finding that personal freedom isn't enough, eventually someone is going to have to bring down King Victor and his supporters. A variety of groups are seemingly ready and waiting to do this, and Silver could easily fall into the role of their figurehead....but will she? There are hard choices to be made, choosing between the safety of family and friends, and the bringing down of King Victor.

There's more chance for the reader to get to know the other Offerings this time - particularly Faith who steps out of Silver's shadow with a heart-breaking story-line and some very hard choices to make.

The story is as action-packed and nail-biting as Reckoning, with both support and betrayal to be found in unexpected places as Silver tries to pick her way between conflicting emotions and advice. The only downside is the long wait for the third, series-concluding book.