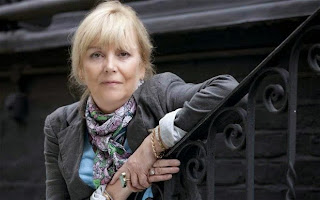 Kate Atkinson's latest novel, A God In Ruins, takes us back to the world created in Life After Life, but this time seen from the perspective of Teddy, bomber pilot, husband, father, grandfather. Having read and loved it, I was delighted to be able to pose a few questions about it......and Jackson Brodie...


At the heart of A God In Ruins lie Teddy's wartime experiences, they change him and his life forever.  What led you into this area of fiction, a war novel?

“The novel I wrote before [Life After Life ed.] was also a war novel, and I knew that this one would be too.  Right back in Behind The Scenes at the Museum there were chapters set during World War II and I knew I wanted to write more. I think I was always working my way towards this novel but I was never ready, and luckily I was ready for it when I started to write! But war is such a huge subject, it sounds terrible but it is also a gift to an author in the way that tragedy is a gift to an author, we feed off misery in a way. Also in war there are so many stories of so many different kinds that some of them, I think, need retelling through fiction.”

Teddy's author-daughter Viola makes a drunken side-swipe at the fact that writing a novel about war would make critics see her in a different light, as a 'serious' author. Do you think women's writing is trivialised and overlooked by reviewers, critics and even the readers?

“I am here paraphrasing Joss Whedon (Buffy the vampire slayer) who said ‘the very fact that you need to ask that question, is the answer’.”

How did you go about research? Reference books could give you the details of bombing raids or casualty statistics but how did you find out what it felt like actually be in a Halifax bomber, let alone flying over enemy territory?

“I did read a lot of factual books but I also read a lot of first-hand accounts and they’re a great way into understanding what it was like.  I love recreating atmosphere. I also have an imagination, of course.”

You've described A God In Ruins as a companion piece to Life After Life - are there any more stories to be found within the world of the Todds?

And, just a little off piste, are we likely to see a return for Jackson Brodie in the near future?

“Not in the near future (I don’t think) but I do have another Jackson Brodie in me. I don’t think it will be just yet.”

Thank you Kate for such interesting responses - and I, for one, would be delighted to read more about the Shawcross sisters.