Sword of Destiny by Andrzej Sapkowski 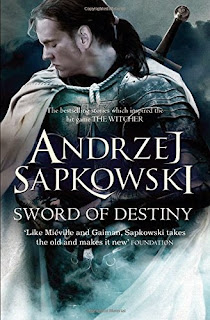 Geralt de Rivia is a witcher, a man mutated by drugs, and trained in the tracking and killing of monsters. He travels the land, saving town and countryside from the ravages of these creatures, but believes that not all non-humans are harmful and that Man should learn to live alongside them rather than wipe them out. This collection of six stories tells of his adventures with dragons, mermaids, dryads, and the disgusting multi-limbed monsters that lurk in middens or under bridges waiting to prey on passers-by, along the way meeting up, and parting from, his sometime lover, the sorceress Yennefer, the bard Dandelion and 'his destiny' the child Ciri.


I always say I'll read anything providing the story and the writing are good, so I've never had any hang-ups about 'genre' but what I've found recently with fantasy is that it comes in massive chunks - a book of six or seven hundred pages which ends on a cliffhanger and turns out to be part of a trilogy or even longer series (and I don't just mean George R R Martin!). Here though it's in a form I love - short stories, each standing alone but part of a wider story arc - in this case all involving the Witcher, Geralt.
The stories all rattle along at a good pace, with sword fights and fearsome creatures a-plenty, but aren't just tales of fantasy and magic for the sake of it. Geralt finds himself in situations that explore all-too-human emotions and failings, from the very personal to wider social issues; destruction of environment or discrimination against and fear of outsiders are things that apply as much in 'our' world as in the Witcher's.

This collection ties in to a wider series of stories, novels and console games, and I'm now sufficiently intrigued that I want to read more of the series ......if only some of the games would play on my old PS2....