New Year - New Music? 1001 Songs You Must Hear Before You Die 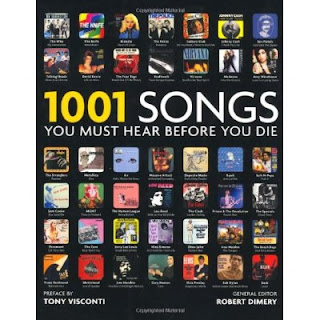 Each year I find my musical tastes moving and changing very little. I listen to the same radio stations and am influenced by my daughters listening habits. As the new year starts perhaps it's time to explore more and see if there's something else out there for me?

Maryom won this book through a "retweet" on twitter but frankly she's not a music person. When it arrived postie put his bag down and then remembered he had left it in the car because it is HEAVY. It is nearly 1000 pages in length with some pages featuring 2 tracks, some pages having contemporary photographs and much of it in full colour. When we opened it I enquired as to why? and I suspect it was 'because I could'. Well I had a brief glimpse and then our teenage daughter did. As I read more I became intrigued, amused, interested, nostalgic and generally fascinated. Our daughter has looked through and commented, excitedly, about some of the more recent content and then threatened to use the book as a weapon if "Mother doesn't ..... I'll hit her with this book!". Not the use I would recommend for this tome though.

The first thing was that my expectation of this book was that it would tell me what I should like in music and bury me in statistical data on the groups, singers, producers and writers.

Put your expectations to one side and try it. It starts with some brief explanation on the history of the 'single' and explains a few of the people involved in the compilation of this book. Robert Dimery is the 'general editor' and it does not only reflect his tastes.

It talks about the tracks and their role in the development of a musical style and what that style comes from and later becomes as well as explaining the importance of the song in the careers of artists and writers. Then index is by artist and lists the best 10,001 tracks, but where that track is in the top 1,001 then a page reference follows. I was a little disappointed to see Billy Joel has a fair few in the top 10,001 but not in the top 1,001 and the Ink Spots have only 1 in the 1,001 and it's a track I am not familiar with while all their 10,001 entries I can join in with.

Most importantly it is not written with bigotry but contains a degree of humour and gentle persuasion so go on YouTube and try a few then take a look around the web for wax, vinyl, CDs or downloads and try some new music in 2011.