Any Dream Will Do by Maria Duffy 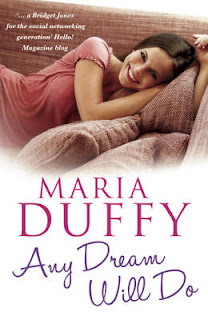 30 yr old singleton Jenny Breslin has become addicted to twitter - chatting to her online friends as often as she can, at all hours day and night. Then in a rash moment she invites her three best on-line friends to visit for the weekend. When they accept, Jenny hits major panic mode. How can her real life live up to the one she's painted on Twitter?  But on the other hand, how many secrets have her friends hidden? Zahra's job isn't quite what she claims, Fianna's life isn't the cosy domestic bliss she'd said and Kerry? Well, Kerry's certainly NOT what Jenny had been expecting

When I've had enough of blood, gore and emotional trauma, I always find myself back at chick-lit for light relief - and this is the sort of light-hearted story that hits the right buttons for those moments. A heroine to laugh or cringe with, highs and lows along the way and the promise of a happy ending - what more could you want? This is the first Maria Duffy novel I've read (appropriately after 'meeting' her on Twitter) and I'll be looking out for more.

Something really puzzled me though - the cover! It's not often I bother to comment on them but this one just seems so inaccurate. You'd imagine the young woman featured there would be Jenny, after all she is the heroine. But she's described as having hair dyed red, make up so thick her 'face was barely recognisable', several ear-piercings and an eyebrow stud and a style of dress she describes as 'sort of punkish, but without the hob-nailed boot'. Hmm, not very like that cover!

Buy Any Dream Will Do

from Amazon
Posted by maryom at 09:25