The Secrets of Stonehenge by Mick Manning and Brita Granström 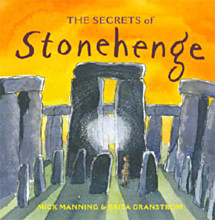 Stonehenge has captured the imagination as long as man can remember - long after he can remember what it was built for. This book contains no new answers about it but does look at what is known, what has been deduced and what the stories surrounding it's history are. From calendar to worship, from legend to alien landing site - there seems to be little that hasn't been considered about it's origins and all are mentioned here.

The stones originate from outside the area and the book talks about where they came from and how they could have been transported. It talks about the construction techniques that may have been used and the people who may have built it.

Throughout it talks in a positive, non-contradictory way but also without dogma and this subject is so controversial to so many that avoiding dogma is a big plus in this book's favour. It also goes back in history to before the henge we see today and shows what excavations have revealed about the site before.

Couple this history with cartoon like drawings and historical asides this book is a great asset for children to learn from.

Maryom described it as "Fun, colourful introduction to one of Britain's most enigmatic monuments" - yes, it's that too.