Black Sheep by Na'ima B Robert 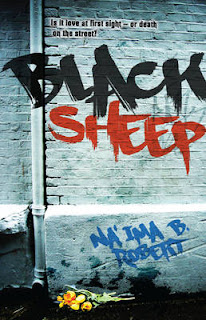 Dwayne is 16 and a member of a London gang when he meets Misha at a party. Misha stands for everything Dwayne doesn't. Misha is working hard to get good GCSE results and go to college to get 'A' levels and then university to study science. Her life is all planned out, with the help of her mum, and she is 'going for it'. Dwayne has no need for school, he is making plenty of money selling drugs and thinks life is going well for him and his mum has written him off. Well that was all true before Misha appeared, now everything is changing but can it change? Will the gang let him out? Will the school give him a chance to turn himself around? And will Misha's mum let Dwayne into Misha's life?

If you have read this far then you probably know how it's going to end. Well, you DON'T. I was extremely surprised by the ending that more reflects life than fairy stories. I picked this up expecting a love story - not that I choose love stories for preference - but it was on the TBR pile and needed to be taken off. But it's not a love story nor is it a story of gang violence although both are in the book. It's a story of how people fall in with theirs peers because that's what's expected of them and how they need to sometimes plough their own furrow. Some readers may not be comfortable with the fact that Islam plays a part in the story but don't be - please! It's used as a device for change but also carries an important message about 99.9% of Muslims.  It's an interesting story, told well and I really enjoyed it although I would have liked a different ending - but that happens so often and mainly with the best books.

At 370 pages it may seem like a long read but (a) it's more value per page and (b) it pulls you along so fast you won't notice the page fly by.