At the Dying of the Year by Chris Nickson 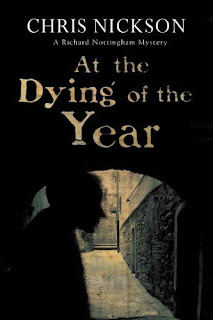 "Leeds, 1733. Three children are found dead in a disused bell pit, their bodies battered and bruised, each of them stabbed through the heart. Fear, suspicion and violence tear at the city as Richard Nottingham, John Sedgwick and Rob Lister hunt a ruthless child-killer. The Constable is certain he knows who's behind the murders, but his efforts to bring the killer to justice brings a blow that strikes right at his own heart."

Nottingham has only just returned to work after serious injury and is still very frail but he must also face the added frustration of class and wealth causing credibility issues with witnesses as he struggles to get the proof necessary to try the people he believes to be the culprits.

Although there are four previous Richard Nottingham stories, this is the first I have read. I found it to be extremely entertaining and I felt Nottingham's frustrations as Nickson portrays them so graphically. And when the end of the book comes all too quickly around, I have to admit that I did not like the ending. It certainly wasn't what I expected but Nickson carries it off very well and I found myself frustratedly accepting the ending he wrote.

It is not a 'whodunnit' but a crime thriller and one that really does thrill. I shall certainly be looking out for more from Nottingham and his crew - hopefully with a new mayor as I didn't like him one bit **nasty man**.

Buy At the Dying of the Year (Richard Nottingham Mysteries)