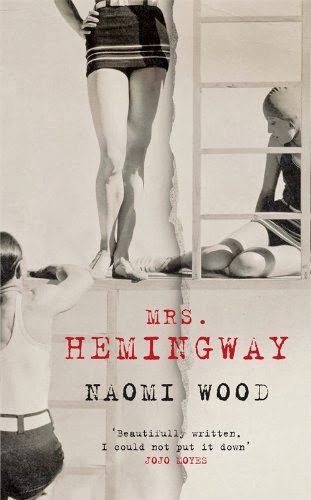 Mrs Hemingway is the story of not one, not two, but the four wives of Ernest Hemingway. There's a slight problem with a biographical novel of this nature that at least some readers will know how everything ends but although I knew in a vague sort of way that there'd been more than one Mrs Hemingway, I didn't realise there'd been four - and other lovers as well! - so I was intrigued to discover what exactly so many woman saw in this man.
Spanning 35 years, the novel moves from a shabby Parisian apartment to the newly-discovered French Riviera, to the Hemingway villas in Key West and Cuba, to a cold Idaho autumn, and follows Hemingway from struggling writer still full of confidence and hope, through his most productive years to dried up middle-age riddled with self-doubt. He certainly comes across as a man who lived up to every macho, larger-than-life, hunting/shooting/fishing anecdote ever told about him, always wanting to be in the thick of the action from a shrapnel injury in the first world war to helping liberate Paris (particularly wine cellars) in the second. While he's there in spirit though on every page, this isn't really "Papa" Hemingway's story but that of his wives - Hadley, Fife, Martha and Mary.
The book is spilt into four sections, one for each wife, and, starting unusually at the end of the relationship, charts its rise and fall in flashbacks. As fiction, it goes where mere biography often can't - into atmosphere and emotion. It's a very intimate book capturing the small details that make a reader feel 'there' in the scene and, throughout, the writing lured me on with the feeling of being an invisible spectator observing the characters' private moments.  I really felt I was 'there' - swimming in the Med with Hadley, seeing the streets of newly-liberated Paris with Martha and sharing Fife's loneliness in her exotic Key West garden, or Mary's despair.
Mrs Hemingway is a rather lovely book that brings these four women, and the man they all loved, to life on the page. I don't think it matters if you know everything there is to know or nothing at all about Hemingway, Naomi Woods has created a wonderful story that will appeal to all.

If, like me, you're now intrigued by Mrs Hemingway you can find out more, including photos, on naomiwood.com