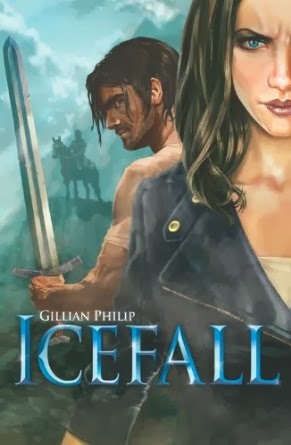 Seth MacGregor and his clan have been kicking their heels in exile in the mortal world for too long. Both they and their arch-enemy, Sithe queen, Kate NicNiven are growing bored and restless. The Veil which separates the two worlds is weakening with time but Kate still needs the powers of the Bloodstone to destroy it and see her world domination plans come to fruition. With this is mind she's attacking Seth's clan in the mortal world, picking them off one by one, with the hope of provoking a retaliation that will put them all back under her control. Power seems to have gone to her head though since we last encountered her, and she's no longer satisfied with the idea of ruling both Sithe and mortal realms but wants to be worshipped as a god - and is prepared to strike a deal with anyone or anything, no matter how evil, to achieve it.

I started Icefall with more than a little trepidation - I've loved the Rebel Angels series but it's always been billed as four books in length, and here we are at Book 4. It'll all end happily, won't it? The hero and his lady-love will walk off hand in hand into the sunset? Well, unfortunately that's not the Gillian Philip way; Icefall means another round of pain and suffering, anguish and heartache for characters and readers alike.
If anything, this felt grimmer than the previous books; the habitual violence of the Sithe spilling over into the 'real' world and, with Kate slowly draining Seth's soul away, emotionally bleak. It's a book where happiness is brief and only come by at great cost, so 'enjoyed' isn't the best word to describe it. Nonetheless, it's a gripping, fitting end to the story. I'm just sad to leave the Sithe and their world.

The problem always with reading a series as it's written, so to speak, is that there are inevitable gaps while waiting for the next book to be published. So in a way I envy the readers who are discovering the series for the first time - they can pick up the first book Firebrand, and work their way through with no long pauses.

from Amazon
Posted by maryom at 17:43