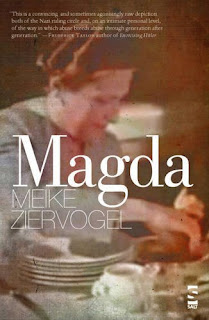 "In this daring portrayal of Magda Goebbels – wife of Hitler’s propaganda minister Joseph Goebbels – Meike Ziervogel unveils an historical tale of abusive mother and daughter relationships that reaches a terrifying conclusion in the last days of Nazi Germany.

Magda is born at the beginning of the 20th century, the illegitimate child of a maidservant who feels burdened with a daughter she does not want. The girl grows up to become an ambitious woman, desperate for love and recognition. When Magda meets Joseph Goebbels, he appears to answer all her needs, and together they have six children. Towards the end of the Second World War, Magda has become physically and emotionally sick. As she takes her children into the Führer’s bunker, her eldest daughter Helga experiences an overwhelming sense of foreboding."

When I was first offered a review copy of Magda, I was more intrigued by the fact that it was written by the founder of Peirene Press than by its story-line. After all Peirene has become noted for its short, perceptive fiction, so I wondered what and how Meike Ziervogel would write herself, whereas a fictionalised biography of Frau Goebbels didn't seem overly appealing. So did it measure up? Yes!

As I half expected, Magda is a short book - under 120 pages - but one that packs a punch. It's a powerful, emotionally draining novel that takes the reader behind the public façade and gets into the mindset of someone who commits the cruellest of acts in the belief that they are doing a kindness. The author doesn't try to find excuses for Magda's behaviour but to uncover her possible thoughts and motivations, starting with her rather lonely, institutionalised childhood, through finding purpose as a supporter of the rising Nazi party, to the peak of her career as wife of Joseph Goebbels. I didn't know anything of Magda Goebbels before reading this and would probably have dismissed her as a fairly brainless 'trophy' wife. By the time I reached the moving end, I felt that I understood her, even if I didn't approve.
Magda isn't the only character of course. I particularly liked the portrayal of her mother - being questioned by a Russian commissar and trying desperately to distance herself from any involvement in her daughter's acts. Magda's own daughter, Helga, seemed a little too trusting for her years - a combination of innocent yet brain-washed due to her upbringing within Hitler's inner circle.

A disturbing book but one I'd recommend to anyone with interests from psychological profiling to Hitler's Germany.

If this has intrigued you, find out more in our Q+A with Meike Ziervogel