A Heart Bent Out of Shape by Emylia Hall 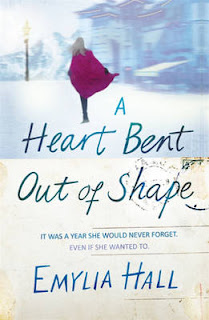 19 year old Hadley Dunn has led a quiet, unremarkable life with no great upheavals, happy or sad, to disturb her. Then a chance sighting of a brochure inspires her to spend her second year of university in Lausanne, on the shores of Lake Geneva, and she begins to live with an intensity she'd never thought possible. She quickly forms a strong friendship with Kristina - the sort of friendship that should have lasted a lifetime - but then the unthinkable happens and Kristina dies. Stricken by loss and guilt, Hadley turns to the only other people she feels close to - Hugo Bezier, a strange old man met accidentally in a bar, and her American Literature professor, Joel Wilson. The first encourages Hadley in her attempts to track down Kristina's mysterious boyfriend Jacques; the latter offers support of a more emotional nature - and the two soon find themselves heading towards a relationship that could land him in serious trouble.

Just occasionally a special book comes my way - one that I pick up, read a page and don't want to leave till the last. Emylia Hall is showing herself to be the kind of author who knows how to write such a book! Her debut, The Book of Summers, had me enthralled so I've been waiting rather anxiously for her follow up, A Heart Bent Out of Shape. I say anxiously because there's always the nagging fear that an author might not live up to the promise of their first book - I needn't have worried though, A Heart Bent Out of Shape is easily as compelling as The Book of Summers and perhaps even better!
There are certain similarities; mainly the importance of place and a 'coming-of-age' aspect. This time the setting is the cosmopolitan sophisticated city of Lausanne with its steep streets, elegant hotels, wonderful lake and mountain vistas. Against such a backdrop how could anyone fail to live intensely? Kristina's enthusiasm for life and her insistence on savouring every minute rubs off on Hadley, who begins to live for the first time in her life with passion - for her friend, for the works of Hemingway, for Joel. But, as various characters stress throughout the story, this aspect of Lausanne is only a setting; a veneer beneath which it's the same as anywhere else. Welcoming passion and love into her life comes easily for Hadley, but there's a flip-side to life with tragedy, death and disappointment waiting for her - the emotions that will lead to her leaving Lausanne, an older, more experienced, more 'grown-up' person.
There's an additional element to this second novel - almost a whodunnit feel to the latter half of the story with suspicions and plot-twists that kept me up and turning pages till way past midnight.

I may be gushing a bit here but I absolutely adored A Heart Bent Out of Shape. If you've already discovered Emylia Hall, you'll delight in this; if you haven't, maybe you should - great for fans of Maggie O'Farrell etc.