The Einstein Pursuit by Chris Kuzneski 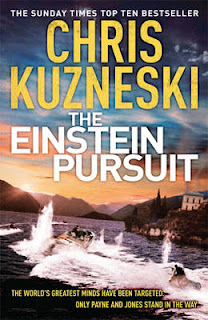 When a laboratory in Stockholm is blown up and the scientists working there all killed, Interpol in the form of Nick Dial is called in to investigate. Working with local detective Johann Eklund, he soon discovers that something very hush hush has been taking place there and that the blast seems intended to remove all trace of it
- but can't find who would blow the place up and why.

Meanwhile over in the USA, elderly Swedish scientist Mattias Sahlberg realises someone is out to kill him. The only person he can turn to is Jonathon Payne, son of his former employer, head of Payne Industries and ex-special forces guy - a good man to have on your side when someone is after you with a gun! Along with his best friend, another ex-special forces man, David Jones, he starts to put the pieces together and realise the link with the bombing in Sweden.

I found The Einstein Pursuit a very enjoyable light read and very funny at times (especially Jones' trip to the dentist which I insisted on sharing with anyone with hearing distance!).
After a dramatic and explosive opening, followed by a gun fight round the streets of Pittsburgh I was a little surprised how much of the 'action' took place at a computer terminal uncovering the links between the various plot threads or tracking people's movements on CCTV There are a few huge set pieces of gunfights or chases but most of the detection is done from a desk. This doesn't stop it from being a very compelling read - perhaps it might even improve it, particularly if like me, you find so many thrillers actually slow down during blow by blow fight scenes.

from Amazon
Posted by maryom at 09:55