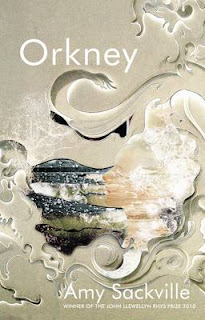 A couple have chosen to honeymoon on a remote Orkney island - not an obvious, average honeymoon location but they're not an average couple. He, Richard, is an eminent literature professor, 60 years old; she, who's never named, is nearly 40 years his junior, one of his recently-graduated students. He sits in their holiday cottage, working on what is to be the crowning achievement of his long acclaimed career; she sits on the rocks or walks along the beach, just out of reach of the tide but always mesmerised by the sea. At night, he sleeps deep and dreamlessly; she wakes from nightmares of tidal waves and floods.
"Take Me North", she said - but there, close to the island she was born on, she seems to change. Was she ever quite as her doting husband imagined?


I read Amy Sackville's debut novel, The Still Point, a while ago and was completely enthralled by it. At the time, I went round web-sites and book shops searching for something else by her, yet somehow this second novel has slipped by me and it was only when I happened to see an event with her at Edbookfest that I realised this book was even in the offing.
Orkney is more unusual than The Still Point, more certain of itself and prepared to take imaginative risks and hope the reader will follow. I was reminded a lot of AS Byatt's Possession, perhaps because of the shared threads of disparate-age relationships and shape-shifting female sea-creatures, but also due to the play on, and with, words.
The story evolves through Richard's eyes, told in the first person, the early cosy intimate moments contrast sharply with the ambiguous shifting feel to the later half of the book. At first Richard and his wife seem like any other newly-married couple - delighting in little games and in-jokes of their own that are meaningless to outsiders - but gradually they move apart. Richard's work concerns the myths about sea-creatures that take on female form and his obsession with it starts to distort how he sees his wife. The solid, corporeal girl who attended his lectures changes into someone ethereal and shape-shifting.
There's a third presence in this marriage - the sea - which the author captures in all its moods, one moment sparkling with light, the next dull and dark, shrouded with mist. I don't think I've ever read anything that captures the atmosphere of Scottish island seas as well as this does.

Orkney is a haunting, lyrical book, to stretch the reader's imagination. One I'll return to many times for its poetic beauty, though without doubt the ending is enigmatic; if you like things cut and dried, all ends tied off, you won't be happy.

from Amazon
Posted by maryom at 10:14