The Dead Men Stood Together by Chris Priestley 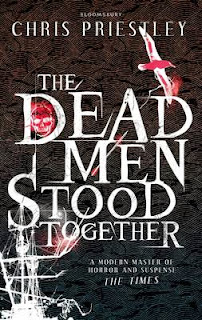 Lured by tales of adventure and far-off lands, a boy jumps at the chance to join his uncle's latest voyage. This trip won't be like any he's previously made with his father, up and down the coast - and before long, he's wishing he'd never set sail! A storm takes the ship and blows her hundreds, maybe thousands, of miles off course into a frozen waste where icebergs loom and the sea freezes. As the ship becomes held fast by the ice, the crew become restless and bored. The monotony is only broken by the visits of an albatross, who quickly becomes a pet of the crew. Then the unthinkable happens, showing off about his skill with the crossbow, the Uncle shoots the bird - and the real trouble starts. Suddenly freed from the ice, the ship is blown to an area of intense heat and lies becalmed, at the mercy of whoever, or whatever, may find them.

In case you hadn't guessed by now, The Dead Men Stood Together, is a re-telling of Coleridge's The Rime of the Ancient Mariner. If you've memories of a dull, dragging, endless poem, stumbled through in the classroom, then think again. While keeping a 'period' feel to it, Priestley casts a fresh eye on the tale; telling it from the point of view of the Mariner's unnamed nephew - sharing his delight at heading off to sea and then his growing horror as events unfold. I was absolutely gripped!

A story to delight lovers of both sea-faring and horror stories, although aimed at older children and teens, its wonderfully tense and atmospheric style will have adults hooked too. With most children's books I try to get inside the head of the supposed reader, but with Chris Priestley's I don't have to - he doesn't talk down to his readers and his The Dead of Winter is one of the scariest books I've read!


Buy The Dead Men Stood Together