Sammy Feral is a normal boy whose family own a zoo and whose family are just a little bit weird. In the first Sammy Feral (Sammy Feral's Diaries of Weird) book his family were all turned into werewolves. He met Donny and Red, cryptozoologists, (who are also a little bit weird - in their own way) as he tried to find a way to get them back to normalish. I say normalish because he's hardly normal himself - he can talk to weird animals that don't exist. These are fun books that are captivating for the younger reader with lots of black and white illustrations. 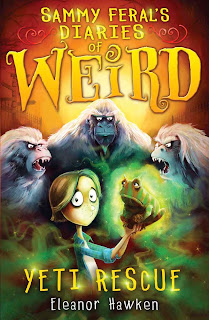 
A Mongolian Death Worm turns up at his zoo, he’s not that surprised. The Death Worm needs help: his best friend, Bert the Yeti Chief, has gone missing.
Can Sammy summon the Ministry of Yetis and rescue Bert? He’s going to need help from his old friends Donny and Red, not to mention a very reluctant Wish Frog… 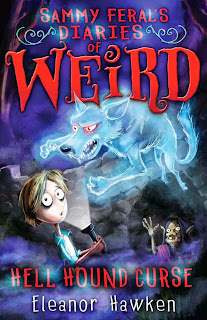 
To make some extra money for Feral Zoo, Sammy, Red and Donny decide to promote their cryptozoology business – investigating animals that don’t exist. What could possibly go wrong?
Everything! Hired to check out sightings of a ghost dog, the friends uncover the terrifying legend of the Hell Hound. Anyone who is seen by this terrible beast is struck with a death curse. So when Sammy’s best friend Mark runs into the deadly dog, Sammy knows he doesn’t have long to figure out how to save him!